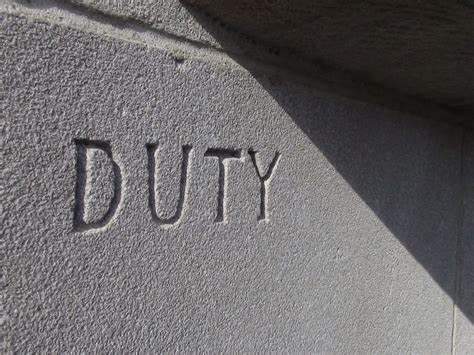 "Perform your obligatory duty because the action is indeed better than inaction."

Duty; A really small word but one of the heaviest words. What does it mean? It simply means something one has to do because they are ought to do so. Each and every human needs to perform their duty towards one another. The duty of a mother is to raise her child until it grows up and stands up on its feet. Similarly, a child has a duty to look after its mother when she ages and cannot take care of herself well.

Let us understand the importance of duty with the help of a short story.

"Once, there was a boy who was raised very well by a widower. This boy was very sharp in every aspect. The father worked very hard to make sure that the boy gets everything he requires in order to lead a better future. The boy did really well and managed to get a job abroad. After having received the offer letter, the boy said to his father that he'll first go to this new location, arrange everything and then get him there. Days past and there was no sign from the son. At last, the father came to know that his son didn't want to take him over there as it'd be difficult to look after him over there. Months later, the father passed away due to some illness with no one to look after."

What do we learn from this? By not performing a simple duty, the young man lost the only person he ever had in his life. Doing what one is supposed to be very important.

There are many more simple things that a human should do apart from these.  One such duty every citizen has towards his/her country is selecting a leader through the election. But what happens? We never see a 100% turnover in a polling booth ever. Sometimes people run errands for no reason but they can't fulfill their duty.

Of course, there are many obstacles on the path of completing a duty, but one has to be bound to their duty and complete it no matter what they face. An obstacle should never be the reason for one to put a full stop. Humans lean towards their comfort instead of performing a few important actions.

"Life is all about responsibilities; completing it defines what you are."