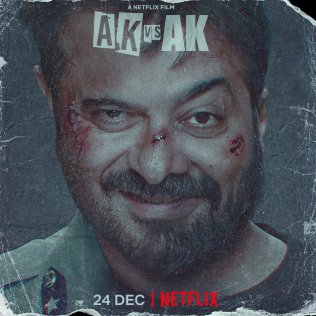 This is a film on a film being made on a film being made. Yes, it is confusing and bizarre in terms of idea but somewhere it sounds so interesting. Vikramaditya Motwane, one of the few directors in India who plan things very well and excels in execution like in Bhavesh Joshi. I will try my best to not at all give any spoilers so that you can peacefully enjoy the madness.

The movie opens with a premise of Anurag having this idea of making a film with Anil Kapoor and how they start filming it. I won’t get much into the story as each giveaway will destroy a layer Motwane created so skillfully. Film has this unique feature of making us suspect it as a film in some frames and as a documentary in others. We all know the madness Anurag takes with him as an aura in his life that makes him the best spontaneous director of India, but this film challenges that and takes it to a whole new dimension.

This film has certain parts which stand out as so brilliant that I can't help but just admit that this is the best film of this year. Film keeps you at the edge of the seat in guessing which story is fake and which is the film that we are watching, is it the one Anurag is directing or the one Motwane is. Indian films have struggled a lot in making convoluted stories and some gems that I can remember are Andhadhun, Kaun(1999), Agent Sai Sreenivasa, and Vikram Vedha. There are more convoluted narratives like the Race franchise, but most of them fail in keeping control of the convolution and not falling prey to the same. This film is so strong in holding to the creation that characters get confused in the narrative, but not the audience which is so rare.

I have always been a fan of films about films like Luck by Chance and Bombay Talkies. Ak vs Ak is brilliant because of the awareness it has as a film about itself. Kashyap and Kapoor instead of manipulating the audience by whitewashing their personality through this medium like other biopics do, Gives the writer and director full liberty to use the worst of both these big shots in India who stay at extremes of art and industry. There is this line that Kapoor says to Kashyap that you should have been in some asylum instead of this industry and Kashyap replies that he is in the correct place. Anurag Kashyap gives the best performance in this film as he surprises with these natural psychotic reactions to the behavior of Kapoor. Anurag reminds Kapoor that this is his comeback film in the film itself. Anil Kapoor does a praiseworthy job and the cameos in this film brings life to this dead end game between the AK’s. ⁣

About the music, All of them are real bangers and suit perfectly the scenes and mental breakdowns the character goes through and I was so moved by the lyrics that the end credit song will make you sit till it ends. I am so happy to be born in this generation where artists get together to make a gem like this by sacrificing their so-called standards/preferences. Motwane and Anurag together have this creative blast that every time they collaborate we get to celebrate the work. With the ending being average compared to the narrative it followed still managing to end the convolution decently. I wish more such films release where the camera is not a device and the actor is not a superhero.