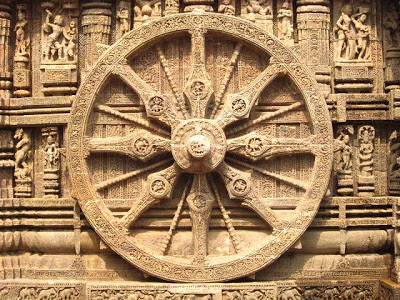 A UNESCO declared world heritage which is a 13th century asset on the coastline of capital of Orissa. Yes, I am talking about one of the most famous temple dedicated to lord Surya, the Konark sun temple. Carved with the Kaligan style architecture, this was built back in 1250 by Naramsimdeva I of Eastern Ganges dynasty.

The temple takes the shape of a chariot driven by 7 horses with 24 wheels. This is a result of talents of 12000 artisans and sculptors. The most fascinating thing is that the wheels aren't not only a decorative part of chariot but is a sundial that can be used to calculate the exact time.

Let me give a quick glance at 'how this is used to calculate the time'.  Each wheel have 8 spokes which divides the 24 hours of a day into 8 equal parts which means distance between each major spokes is 3 hours. Another contradiction for sundial with that of normal ones we use today is that it predicts time in anti clockwise direction with top spoke representing midnight, left spoke for 3 in the morning and so on. There are minor spokes provided in the middle of the major spokes which divides 3 hours into perfectly two halves that out-shots the distance between each minor spokes as ninety minutes. Now coming to adjacent mini level there are 30 beads in between a minor and major spoke hence again the ninety minutes are divided into 30 equal parts resulting a bead timing as minutes. This beads are large enough that we can differentiate this into 3 parts hence a minute can be easily identified. 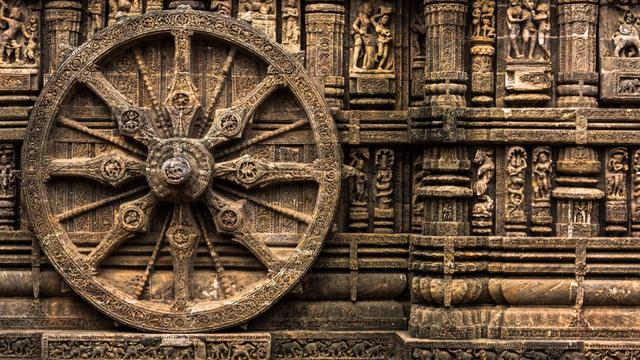 In order to calculate the time a person keeps a finger in the middle of the axle. The shadow falls on to the wheel will help to find time, by enumerating on which bead and in between which spoke the shadow falls as mentioned above.

Now the question that you may have in your mind will be " so what about nights, after the sunset ". Yes there are moon dials too, which helps to calculate time at night but a drawback for moon dials is that other than on the full moon nights, this is 48 minutes slow but on full moon nights the time is accurate.

Various theories says that 7 horses represents the days of a week, 12 pairs of wheels shows 12 months of a year and the 24 wheels represents 24 hours of a day.

Its told that there are even more secrets behind every single carvings which are yet to be discovered. 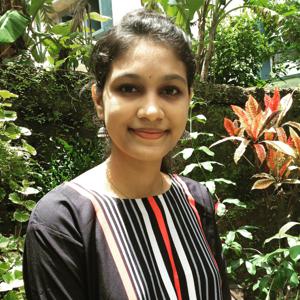 Excellent work! This significance is so unique. Thank you for the informative blog!