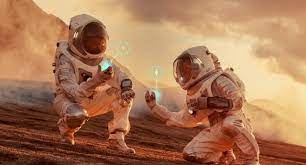 The Outer Space Treaty, formally the Treaty on Principles Governing the Activities of States in the Exploration and Use of Outer Space, including the Moon and Other Celestial Bodies. Treaty states that "outer space, including the Moon and other celestial bodies, is not subject to national appropriation by claim of sovereignty. Treaty does not prohibit the placement ofconventional weapons in orbit. The treaty also states that the exploration of outer space shall be done to benefit all countries and shall be free for exploration and use by all the States. Despite of harsh environment, several life forms have been found that can withstand extreme space condition for extended periods.

program achieved many of the first milestones including the first living being in the orbit in 1957, human spaceflights in 1961(Yuri Gagarin) the first space walk (Aleksi lenov) on 18th march 1965, the first automatic landing on other celestial body in 1966, and the launch of the first space station in 1971.

After the 20 years of Exploration ,focus shifted from one-off flights Space exploration is the ongoing discovery and exploration of celestial structures in outer space by  means of continuously involving and growing space technology. While the study of space is carried out by astronomers with telescopes, the physical exploration of space is conducted both by unmanned robotic probes and human spaceflights.

While the observation of objects in space, known as astronomy, predates reliable recorded history, it was the development of relatively efficient rockets during the 20th century that allowed physical space exploration to become a reality. Common rationales for exploring space include advancing scientific research, national prestige, uniting different nations, ensuring the future survival of humanity, and developing military and strategic advantages against the countries.

Space exploration has often been used as a proxy competition for geopolitical revelries such as the Cold War. The early era of space exploration was done by a space race between the Soviet Union and united states. The soviet space to renewable hardware, such as the space shuttle program, and from competition to cooperation as with International Space Station(ISS).

The Obama administration proposed a revision of constellation in 2010 to focus on the development of the capability for crewed mission beyond low earth orbit(LEO),envisioning extending the operation of the ISS beyond 2020,transferring the development of launch vehicles  for crews from NASA to the private sector, and developing technology to enable missions to beyond LEO, such as earth –Moon L1,the moon, earth-sun L2,near earth asteroids and probes or mars orbit.

In 2000 peoples republic of china initiated a successful manned spaceflight program,  Europian, Union, Japan, and India have also planned future manned space missions. China, Russia, Japan, and India have advocated manned missions to the moon during the 21th century, while the Europian union has advocated manned missions to both the moon and mars during the 20/21th century.

From the 1990’s private interest began promoting space tourism and then private space exploration of the moon.

This is not an ending topic. Also this topic is awesome :)