The Festival Of Lig… 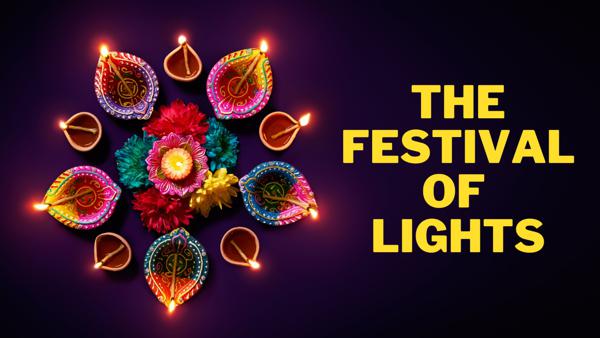 The Festival Of Lights

Diwali festival is well known as the festival of lights which is also called as Deepavali in Sanskrith. Deepa means lamp and avali means rows, together its known as rows of lighted lamps, which brings lots of belief and culture to celebrate it. It has its own importance and significance for people of Jain, Hindu, and Sikh religions. It is the five days celebration that falls every year 21 days after Dussehra. It has the great cultural belief of celebrating behind it. It is the returning day of Lord Rama to Ayodhya after 14 years of exile. People of Ayodhya had welcomed their King Rama by enlightening lamps everywhere and  by burning firecrackers.

People clean up their houses and working places at the Diwali festival. People believe that lighting lamps everywhere and opening all the doors and windows of the home makes the way of Goddess Lakshmi to come to the houses to visit and give blessings, wealth, and prosperity. People make Rangolis and decorate their houses with lightings and lamps, to welcome their relatives and guests and wear new clothes, eat delicious foods, sweets, burn crackers and share gifts. The five days of the Diwali festival includes:

The first day is known as Dhanteras or Dhantrayodashi which is celebrated by worshiping the Goddess Lakshmi. People celebrate this day by singing aarti, devotional songs, and mantras to make happy the Goddess.

The second day is known as the Naraka Chaturdashi (or Chhoti Diwali )which is celebrated by worshiping Lord Krishna as he had killed the Narkasur on charturdashi. It has a religious belief of taking bath with oil in the early morning and worshiping Goddess Kali by applying Kumkum on the forehead. people believe that after taking this bath during diwali, all sins and impurities will be gone from our soul. Naraka chaturdashi is grandly celebrated in the state Goa. They create a Narakasura (a monster of Bhauma dynasty ) using grass, papers and fire-crackers and they will burn this in the early morning.

The third day is known as the main Diwali day which is celebrated by worshiping Goddess Lakshmi, distributing sweets and gifts among relatives, friends, neighbours, and burning firecrackers in the evening.

The fourth day is known as Govardhan puja by worshiping Lord Krishna. People believe in making Govardhan of cow dung at their doorstep and worship.

The fifth day is known as Yama Dwitiya or Bhai Dooj which is celebrated by brothers and sisters. Sisters invite their brothers at their homes. On this day sisters will pray for brother's happy and long life and brothers in return givevarious gifts to thier sisters.

The burning of firecrackers places in the night after Puja of Goddess Lakshmi. On this day people exclude their bad habits and include good habits to get blessings for the whole year. In some places in India, the day of Diwali is the start of the New Year. Businessmen start their new accounts books on this day.

Diwali is the most favourite festival of many as it brings a lot of blessings and happiness. It indicates the victory of God over the evil power and also indicates the start of the new season.