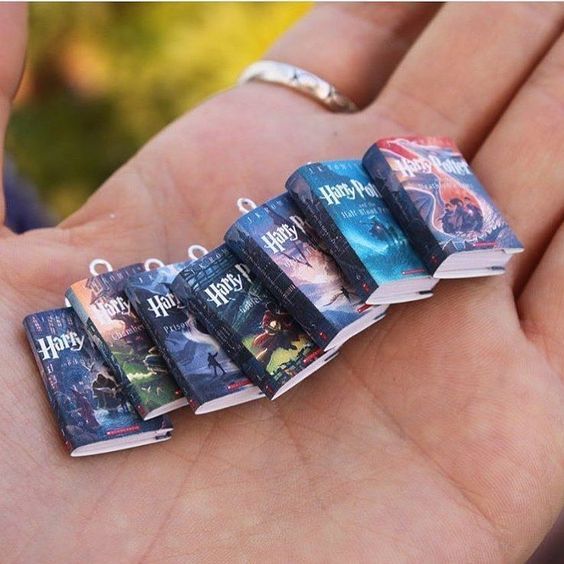 Who doesn't know Harry Potter? , one of the most famous fictional characters.

Yes, I'm talking about  J. K. ROWLING's HARRY POTTER. It chronicles the lives of a young wizard, Harry Potter, and his friends Hermione Granger and Ron Weasley, all of whom are students at Hogwarts School of Witchcraft and Wizardry. The main story arc concerns Harry's struggle against Lord Voldemort, a dark wizard who intends to become immortal, overthrow the wizard governing body known as the Ministry of Magic and subjugate all wizards and Muggles (non-magical people).

This story is divided into 7 parts, namely:

Order of the Phoenix

This story has many genres, including fantasy, drama, coming of age, and the British school story (which includes elements of mystery, thriller, adventure, horror, and romance), the world of Harry Potter explores numerous themes and includes many cultural meanings and references. The main theme is death. Other major themes in the story include prejudice, corruption, and madness.

1st: Harry finds out that he is a wizard and joins Hogwarts. At Hogwarts, Harry and his friends endeavor to unfold the secret behind Sorcerer's Stone. An eleven-year-old boy, Harry Potter, who lives with his uncle, aunt, and cousin, having lost his parents as an infant, finds out that he’s a wizard (someone with magical powers) and attends Hogwarts School of Witchcraft and Wizardry. There he makes many friends, the best of them being Ron Weasley and Hermione Granger. A new teacher at the school that year is possessed by Lord Voldemort, the antagonist of the series, who partially lost his life when he failed to kill baby Harry (difficult to explain in short). He tries to steal a stone that’s guarded by the headmaster of the school, Albus Dumbledore because it’s an elixir of life. It’s up to the trio to try and stop him.

2nd: Harry finds out a magical diary, which shows him episodes of memories, which possessed his friend's sister to do Tom Riddle's bidding. Later, Harry gets rid of the diary and saves Ginny. Ron’s sister Ginny gets hold of an old diary that belonged to adolescent Voldemort through which anyone can communicate with him. She doesn’t realize that it’s his and starts using the diary to the extent of getting possessed. He uses her to open the Chamber of Secrets which houses a monstrous snake that especially targets muggle-borns (nonmagic people). The snake is set loose and many people are hurt (including Hermione). Harry and Ron are bound to solve the issues and save everyone including Hermione and Ginny.

3rd: Here, we are introduced to a fugitive, Sirius Black, who's escaped the prison called Azkaban. Harry attempts to finish him but fortunately, he discovers the true identity of Black and plans his escape. A prisoner escapes from Azkaban (the prison of the magical world) and he turns out to be Harry’s Godfather, Sirius Black, who happened to be his parents’ best friend. He’s under the misconception that Sirius was the reason for their death. Sirius, meanwhile, arrives at Hogwarts (in the form of a dog) to attack the person who was the cause of Harry’s parents’ death. Interestingly, this guy is Ron’s rat (yes he can change forms too). Everyone thinks Sirius is after Harry while he’s just after the rat. In the series of events that follow, Harry realizes that Sirius is innocent and tries to save him from the prison guards (called Dementors) who suck the soul out of people (literally).

4th: Voldemort recovers his body and calls out his dark force. Harry barely escapes from them. There’s a competition called the Tri-Wizard Tournament between three wizarding schools and it’s extremely dangerous. Someone nominates Harry’s name though he’s underage and he’s chastised by people because they think he did it himself for fame. He survives the tournament and with another student of Hogwarts, Cedric reached the trophy first. They both touch it at the same time and are transported to another place. That’s where Voldy is trying to come back to life. He and his side-kick (the rat in the third part who escaped) were expecting only Harry, so Cedric is killed. They take Harry’s blood and Voldy gets his body back (he did not have a proper one after the event described in the first part when Harry was an infant). Then Harry somehow escapes with Cedric’s body.

5th: The Order of Phoenix is a mysterious society against DarkLord and his dark wizards. Very few people believe that Voldy’s back. Even the Ministry of Magic is ignorant and they tag Harry and Dumbledore as liars. The trio forms a group of students named Dumbledore’s Army and trains them to face Voldy someday. Towards the end of the book, they set off to the ministry to get hold of a prophecy regarding Harry and Voldemort and end up being attacked by Voldy’s people.

6th: Harry discovers Snape's past and his innocence, unravels the true nature of Horcruxes and Dumbledore gets killed. This story is mostly about a book owned by “The half-blood prince”, whose name I’m not revealing. Harry learns more about Voldemort’s life and how he’s divided his life into little parts and put them in different objects like the diary in the 2nd part, a ring, a locket, etc.

7th: Harry embarks on the expedition to destroy Horcruxes for getting rid of the Dark Lord and his death-eaters, who have been lurking around the wizarding world, with the help of his friends and acquaintances, he destroys the Horcruxes and Voldemort. Thus putting an end to the Battle of Hogwarts. The trio set out to destroy the parts mentioned in #6, the world having been taken over by Voldemort and his people. It’s way too interesting to be summarized.