Review on "A Silent… 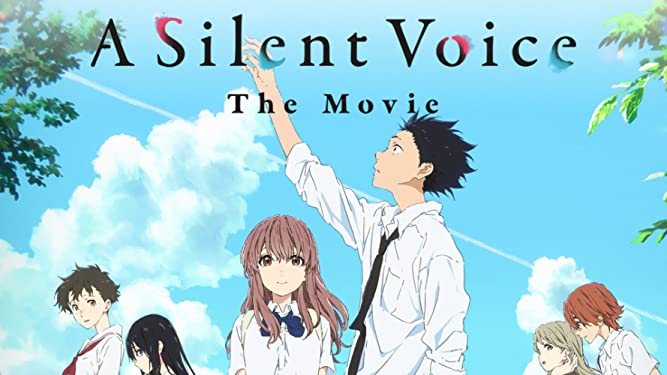 Review on "A Silent Voice"

'A Silent Voice ' ( Koe no katachi), is a movie from a popular manga series written by Yoshitoki Oima. This is a beautiful movie packed with drama,tears,comedy and attempts at suicide. This is the third animated movie from director Naoko Yamada,  the director does his best to condense a 7 volume series into one feature film. The movie grossed around $20 million in Japan alone.

The movie is a definitive example of you reap what you sow, and how all it takes is a single incident to flip your life inside out.

The movie starts with a teenage boy who tries to jump off the bridge to end his life, he changes his mind at the last minute as he recollects his old days in elementary school and the guilt ridden events that have led him to make such a choice. A new transfer student named Shoko Nishimiya introduces herself to the class and informs she's deaf, she tries her very best to integrate with the class but ends up annoying Shoya and his gang,  so the they start to bully her and make her life miserable, Shoya terrorizes  Shoko , a deaf-mute girl who couldn’t be more kind and gentle, even when she’s the butt of everyone’s jokes.

When words reaches the principal that Shoko is getting bullied, Shoya is singled out as the culprit by his teacher,soon the situation flips and the class's bullying is directed towards Shoya. Shoya blames Shoko for his ill situation and they end up getting into a physical fight.She later transfers to another school.He later finds Shoko's notebook that she left behind and decides to keep it.

Shoyas's reputation of him being a bully reaches middle school and he ends up being an outcast. A decade later Shoya never managed to shed the bully label of his youth and ends up in severe depression. He tries making amends and tracks down Shoko, who he hasn't seen since they were kids, hoping she would forgive him for his terrible behavior.

Shoya comes to the conclusion that there is no point in having friends. But being offered a chance to correcting his mistake, he learns sign language and reunites and befriends Shoko, who is still lonely due to her hearing impairment . By then, Shoko herself thinks of suicide due to her own social and emotional problems, which she goes through with ,before getting saved by Shoya, who falls trying to save her and goes into a coma.Shoko later on helps Shoya come out of his shell to accept himself and tries mending the ties which were severed in the past. He finally accepts himself and let's go of his resentment and guilt for himself all this while and see's the world  around him and learns to look everyone in the eye.

This movie portrays friendship and social relationships in a frightening, yet compelling way, it is a movie showing the many facets of teenage friendship, pride, betrayal, redemption, and genuine love. The movie bagged the best Animation of the Year in  26th Japan Movie Critics Awards. Naoko Yamada  received praise for her direction in the movie. The film was selected as one of the nine feature films in the 2017 Annecy International Animated Film Festival competition.

The movie is a masterpiece with intense pacing and narration, with the beautiful music, makes it a must watch movie.

The movie is currently on netflix, and do let me know if you liked it.